Extract from ‘The Clearing’, a supernatural thriller 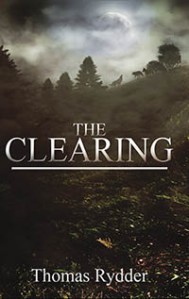 This week sees the publication of The Clearing by Thomas Rydder. This is the book for you if you enjoy the novels of Dean Koontz, Stephen King or Michael Crichton, those stories where everyday people encounter far from everyday challenges.

The book launches in paperback and eBook editions on March 1st. You can see some early comments and reviews about the book on Goodreads here. If you’re quick (and based in the US), you could be in with a chance of winning a paperback copy in this Goodreads giveaway that finishes on Thursday. (We’ll be doing giveaways for other countries at a later date).

To whet your appetite, here’s the prologue:

He stepped aside and let the followers pass. They were haggard and spent from days on the trail with no food, hiding during the day and travelling by night. One of their members had not survived the long walk, and would have to be replaced, and quickly. He looked up at the moon – three quarters full and shining in a cloudless summer sky. Soon. They would have to find a suitable location soon.

Dawn brought them to a small valley, spotted with quaint farms and cattle herds. He left the followers in a dense stand of underbrush and set off to scout the surrounding countryside. By noon he had found it. A cave opening stood before him, the depths cool, inviting, and most important, secluded. Making his way back to his charges, he led them back to the cave and in, allowing them to lie down on the stone floor in exhaustion.

He walked back outside and over to the edge of the steep hill. The valley spread before him, full of creatures who would become their victims. It was time. Time to find the seventh member, for it must be seven. And time to find a successor, for he was growing tired.

Glancing back into the cave, he observed no movement, and only snoring came to his ears. They would sleep soundly until the moon came full, bidding them to rise and feed. He trotted down the hill and toward the lights of houses. The voice of the moon spoke to his soul, and it told him north. North to find a new follower. North to find food. North to kill.

Tim C. Taylor writes science fiction and is the author of 21 published novels as of August 2021. His latest book is 'Hold the Line', published by Theogony Books. Find out more at humanlegion.com
View all posts by Tim C. Taylor →
This entry was posted in Book launch and tagged dark fantasy, supernatural thriller, The Clearing, Thomas Rydder, werewolf, werewolves. Bookmark the permalink.

5 Responses to Extract from ‘The Clearing’, a supernatural thriller