I don’t even remember learning to read, it seemed like I always could. From the beginning I was always very interested in books; but factual books as much as fiction. Physics, the big picture of the Universe, this was an early love, and Carl Sagan an inspiring hero, which all led to a degree in that subject.

But Evolution has been my most passionate intellectual hobby during later decades (I was born in 1958 by the way). Most of my stories tend to have an underpinning of evolutionary mechanisms, from the ‘big engines of history’ to the tricksy workings of individual memes. How evolution applies to, and operates within, sentient societies, is the juicy core of the fruit for me. Though I’ve lightened up on a couple lately, it has been said by some that many of my stories are not for the faint hearted, though they leave a lasting impression : )

Learn more about Andy West at his website: http://wearenarrative.wordpress.com/ 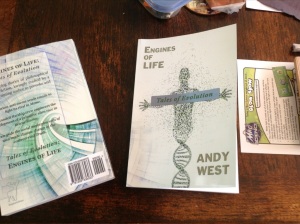 Andy has co-written a techno-thriller trilogy with Ian Watson entitled Waters of Destiny. It’s available in eBook editions, from online retailers such as Amazon.

Andy’s first novel, The Outcast and the Little One, is out now from NewCon Press in print and eBook editions.