This a transcript of an interview author Tim C. Taylor gave on the launch of the eBook version of The Meandering Mayhem of Thogron Throatbiter. 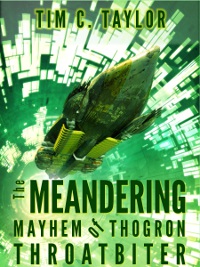 1. Hi Tim. Can you describe your short story, The Meandering Mayhem of Thogron Throatbiter to me?

’Meandering Mayhem’ is set in an alien star system that has just concluded a centuries-long interplanetary war. With all their opponents finally slaughtered, ‘Meandering Mayhem’ is the story of what Thogron’s people do next. If you can imagine Family Guy doing Conan the Barbarian in space then you kind of get the idea. It was a lot of fun to write. It’s about 6,000 words, so a great length to read through in one go over a coffee.

2. I love science fiction and I’m fascinated by the concept of your work; Barbarians discover spaceflight. This sounds as a contradiction, yet this is the point which grabbed my attention as it’s a really unique approach and pretty ambitious. So, why Barbarians and why spaceflight?

Two reasons. I had been reading about Alexander the Great and the great military adventure of his Macedonian army. The Macedonians were thought of as barbarians, not least by the Greeks in his army and certainly by the Persians. In the mind of the average Macedonian infantryman, Alexander’ army was marching so far into the unknown that it may as well have been marching into space. So in that sense, the ‘Meandering Mayhem’ is something like the adventures of Alexander’s army.

Yet Thogron is not Alexander. I had just written some very dark fiction and I wanted to lighten the mood for my next story. So I picked actor Brian Blessed as my template for the Thogron character. You might not have heard *of* him in Hungary, but you will have *heard him* because Blessed is so unfeasibly loud. He played the king in season 1 of the BBC comedy programme ‘Black Adder’. The most watchable and over-the-top TV character I have ever seen. That blood-crazed, wide-eyed, bear of a man roaring: “What? Chiswick! Fresh horses!”… that is my template for Thogron.

Even Thogron, though, has emotions and ambitions. His ship returns for a refit at one point. I remember reading ‘The Forever War’ by Joe Haldeman as a teenager and struck by the alienation the narrator felt when he returned home. I tried to capture some of that.

3. I always love to know the background process of the development and I love to know what motivates the writer. So, what is the philosophy behind your world, story and character building? 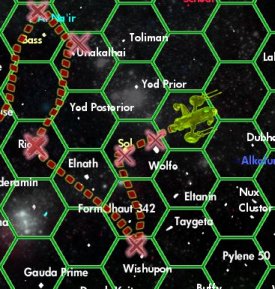 Part of the concept was to consider evolutionary manipulation as an interspecies weapon of war. Basically before the Thogron story starts, there’s been a three-way contest between the inhabited planets of this system and Thogron’s species won. Thogron’s people established bridgeheads in enemy territory where their manipulated biology allowed them to breed at such a ferocious rate that they overwhelm local opposition. I even had spreadsheets working out the numbers. Then, as often happens, I decided that wasn’t the best story to tell, although that remains a strong background hinted at but never given the lumpy exposition treatment. A better story, I felt, was to ask this question? After the wars are over, after this species so tuned to war has won, what happens next?

4. What authors and worlds have influenced your writing?

Sci Fi comic 2000AD was a major influence. I started reading from prog1 when I was 7 years old. Years later I realised that the short strips (such as “Tharg’s Future Shocks”) were mining Golden Age short story ideas from the greats such as Heinlein and Asimov. I’m so glad they did because that hooked me on Sci Fi. Years later I was lucky enough to be published in NewCon Press anthologies alongside two great 2000AD scribes: Alan Moore and Dan Abnett. That was a thrill, I can tell you!

Harry Harrison was a comic artist and he did a version of several Stainless Steel Rat stories for 2000AD. So he was a major influence. Also, David Brin. Alfred Bester, and Stephen Baxter, especially for his Xeelee sequence. And if you are searching for WiFi hotspots in Bromham, England and discover a network named after classic SF author ‘Olaf Stapledon’, then you know you are near my house!

5. You’re based in the United Kingdom, where agents and publishers are pretty common. So, what made you decide to publish independently?

That’s a tough question but an important one. I expect you’re right that there are more agents and publishers here in the UK than in Hungary, but that probably comes with more competition for their attention too. I am lucky enough to be represented by an agent for my novels. So far I’ve had a manuscript read by Solaris Books who turned down the story but invited me to show them another novel, which I am writing at present. With short fiction, especially in the novelette and novella size, that’s a very different issue (not enough money for agents to represent you) but I think the take up of eReaders will lead to a flowering of fiction at these lengths (I wrote an article about that at Indie Book Lounge:http://tiny.cc/0u4dc  ) I’m very excited about that.

So why do the independent publishing for short fiction? I was made redundant in February and was given a Kindle as a leaving gift. That got me thinking, and within a month I had rewritten a some short stories I had sold years before, partly for the fun and partly to broaden my Amazon author page so that when a major anthology I was part of (Further Conflicts) was released, people could read some of the other work I had done. Within a couple of weeks I shifted to publishing other authors’ work that I had previously read and deserved a wider airing. So my Greyhart Press rapidly went from a name I invented to publish myself to a genuine independent publisher. This is a very exciting time to be publishing e-books, as I’m sure we all realise.

The Meandering Mayhem of Thogron Throatbiter is available priced 99 cents [last I heard, it was free!] from Smashwords here. It’s also available at most other retailers (see this page for links)

Thank you for the interview, Istvan. I enjoyed answering your questions.

Istvan Szabo Ifi is a Hungarian artist and writer due to launch his first trilogy of books late in 2011. Take a look at some of his stunning artwork here.