Yesterday, I threatened a top-10 list of my favourite examples of Britain and America being divided by a common language. Well, I’ve got a lot of preparation to do for the YA books that started this off in the first place, so I’ll just post the first half today.

Of course, in the modern age, whenever I come across a usage I’m uncertain about, I take a look on the internet. There I find experts defending the ‘correct’ use of their version of the English language against other ‘experts’ who, naturally, vehemently disagree. I’m not talking about Brits vs. American, I’m talking Brits arguing with other Brits and the same for Americans. It’s a good job that these arguments are happening online because I get the feeling that many would turn violent if they were going on face to face.

If I’ve learned one thing over the past year on this topic, it’s that there’s no sense in pointing to the the heavyweight dictionary on your bookshelf, or to the Chicago Manual of Style or other usage authority. Just because it says that such-and-such a meaning of a word or a turn of phrase is correct to these authorities, it doesn’t mean that people in real life accept that, as all the online disagreements prove; and it is real people who read our books. Besides the written style guides are always playing catch-up to the ever-changing English language, and they are only authorities in formal English. If you’re going to write convincing dialog, you have to throw away the guides and listen to how real people speak for the setting you are writing.

Admittedly, that can be tricky if you write for non-human characters from an alternate reality.

So, on to the top-10. Naturally, I’m writing this as if I am yet another expert. I’m sure plenty of you reading this will disagree with what I write, and want to put me straight. Please do so. I promise I shan’t turn violent.

Vacation = American; Holiday = British. I made the mistake of thinking that was the difference, except it’s not quite as simple because in American English both words are used but with different meanings.

Vacation is creeping into British English, though holiday is still the more common British term. But Brits use holiday equally to mean a public holiday and the kind of vacation where you book time off work and take your family for a week in the sun. Americans use vacation where you book time off work, and holiday where everyone has a public holiday. Or some people have a holiday, anyway… because there isn’t quite such a thing as a national holiday in America or Britain.

Get your research right for public holidays,  because they vary between different US states. And in the United Kingdom, England & Wales have one set of holidays, Scotland and Northern Ireland have another set.

Brits would call these ‘biscuits’…

Another favourite. Biscuit (Brit) and cookie (US) are very rough synonyms, but far from exact because the Brits have imported the word ‘cookie’ to mean a specific type of ‘biscuit’. Or at least, the English have. I think it has other meanings as well if you’re Scottish.

That much I knew, but I was caught out because it’s fairly common in British English to describe something as “biscuit-coloured”. That means a rather boring brown that might also be fawn, dun, or buff. 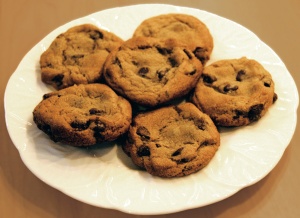 Except Americans don’t use the word biscuit so you can’t use biscuit-colored as a color.  Or so I was told by my estimable American editor.

But if you look at American catalogs for soft furnishings and clothes, biscuit is actually used a fair amount to describe color. But that doesn’t mean it’s a good word choice. Just because you can point to a dictionary or an online catalog and say: “Hey, look! There’s the word.  I can use it!” doesn’t mean you should. Words are the servants of good storytelling, not its master. I  think ‘biscuit-colored’ would sound odd to some American readers and I can’t think of an example where using that particular description is vital to a story.

So if I want to describe something as a dull, light brown, I’ll quietly pick one of the other synonyms.

“Your mom’s coming to visit in a couple days. Better start tidying the house.”

Britons will want to insert an ‘of’ after the ‘couple’.  They will want that very badly. The result might look like this:

“Your mum’s coming to visit in a couple of days. Better start tidying the house.”

In speech, I suspect Brits don’t notice the missing ‘of’ because it sounds like the word ‘of’ could be there but the words are running together. Maybe that’s why leaving it out sounds so alien to British ears, despite watching so many TV shows and movies that come from America. Whatever the reason, in written British English, ‘a couple days’ looks like a typo.

It’s a point I’ve raised with several American friends over the past year, some of whom started from the assumption that to say ‘couple of’ was a mistake; others that to omit the ‘of’ was lazy speech that had no place in written American English. Some of them looked up the term and got very confused because there is a lot of talk online about this, some of it heated, often contradictory.

Looking into this more extensively than you could possibly imagine, I think the truth is that this is a part of American English in transition, that what was once an informal omission is becoming so widespread through real-life usage that it is in the process of becoming a correct form.

Living languages have always done this. But that doesn’t stop people railing against the practice online. Here’s a very mild condemnation from someone who wrote a book about grammatical mistakes. Leaving out the “of” is a “casual, slangy pattern” to this defender of correct American language (who is worth reading and I have a lot of respect for).  Others have used words such as uneducated and sleazy to describe the practice of omitting the ‘of’, and perhaps by implication the miscreants who utter such atrocities.

The same day I first looked this up, I happened to hear a news bulletin where Hillary Clinton was giving a speech in China; she used couple without the ‘of’. I wouldn’t call Mrs. Clinton uneducated, sleazy or casual. How she acts in private is between her and Bill, but she’s none of those things when she’s representing America as Secretary of State.

Does this lady use lazy & sleazy language in her speeches? I don’t think so.

I found that you can read her speeches online. Here’s another one where she says “a couple months”. To be fair, it turns out that I had heard an exception. Hillary Clinton very rarely drops the ‘of’ in speeches, but the journalists posing the questions frequently do.

Not very interesting, but always worth British writers checking how they’ve used  this one.

‘Toward’ is more common in American English. It’s not a hard rule but one worth following.

‘Towards’ is traditionally the more common British spelling. In fact, ‘toward’ is coming in so strongly that most normal British speakers (by which I mean real people, not writers and grammar hobbyists) use both all the time without realizing.

As with all these fuzzy choices, I would recommend being consistent within the same piece of writing.

In British English, keen is a common synonym for eager, though with a hint of being old-fashioned, especially in the sense of “my friend’s keen on your sister”.

As far as I can make out, to use that meaning of the word in American English is living dangerously. I fell foul of my American editor who said that meaning wasn’t used in the States. And yet other Americans say they hear it all the time. Perhaps it’s a regional thing? The ‘eager’ meaning is present in the American dictionaries I’ve consulted, and without the qualification that it’s chiefly a British usage. The only source I’ve found that suggests it’s British is the Oxford English Dictionary (of British English).

Coward that I am on this subject, I’m happy to let Americans fight out this one among themselves and change my keens to eager.

Yes, now I know a little about whiskey or perhaps whisky. Here’s another word in a state of flux. And it’s changed more than once over the past 100-odd years.

Zoom in for a look at the labels… it’s Canadian whisky.

If you go back fifty years, I think it’s fair to say that in everyday usage, whisky was the British spelling of the word that would be spelled whiskey in America. They meant the same thing. If you wanted specifically to refer to Scottish whiskey, then you could use Scotch, just as today you might refer to bourbon.

Whisky producers and aficionados would have disagreed with such a simplistic division even then. Not least because Canadians tend to spell their drink, whisky, and the Irish, whiskey.

Over past decades the Scottish whisky industry has established very successful global brands, and have kept to the spelling ‘whisky’.  The managers of the Scottish brands have hammered this spelling far into the mindset of American whiskey lovers and writers. One of the authorities in the use of American English is the New York Times through its Manual of Style and Usage. In 2009 the New York Times dropped the ‘e’ in whiskey  when referring to the Scottish version of the drink. If you read about whiskey or whisky today, then you will find contemporary writers use both spellings in the same sentence when the context requires it, no matter what version of English the writer is using.

Scottish whisky. No ‘e’ in sight!

The spelling has now become an appellation. Which is ironic, because the ‘e’ was added to ‘whisky’ in the first place by 19th-century Irish exporters who wanted to distinguish their superior drink from the cheap rubbish exported from Scotland (or so they regarded their Scottish rivals at the time).

Which is fine if you’re really into your whiskey/ whisky. But most people aren’t. Not that much, anyway. I would guess that for most readers, it is still the case that whiskey is the American spelling of the British word whisky. No matter what the New York Times might think.

It’s a subject that moves people to poetry. In fact, here’s one now by Stanley Bruce, the Bard of Banff.

In the final part of the top-10, we’ll see pants dropped, rubber gear, and the untranslatable use of the word… ‘the’.

Tim C. Taylor writes science fiction and is the author of 21 published novels as of August 2021. His latest book is 'Hold the Line', published by Theogony Books. Find out more at humanlegion.com
View all posts by Tim C. Taylor →
This entry was posted in Uncategorized and tagged British vs American English, writing. Bookmark the permalink.