Earlier this year, Greyhart Press ceased to be an eBook-only publisher (see here for the slightly naughty announcement). With about a dozen paperback books available or planned to be ready in time, the FantasyCon convention in September seemed a good place to start showing off our books, as well as meeting interesting people, salivating at the sight of all the books available there, and generally having a good time.

So we aimed a couple of book releases to coincide with FantasyCon 2012, held at the Royal Albion Hotel in Brighton, England. A few of the UK-based Greyhart authors came along too, to join in the party.

Things didn’t start off too well when I arrived there Friday night. I tried to check in but they wouldn’t let me in! I had to make a call home to my wife to fax confirmation details through. Turns out they’d booked me under the name K. Kaylor and not T. Taylor. At least, I assume that’s what happened. Possibly there was someone called K. Kaylor waiting miserably outside in the rain…

There were 500 delegates at the convention and we pretty much took over the hotel. Pretty much, but not entirely. There were some families there too, overseas tourists who must have been bemused by the posters on every wall advertising strange fictional worlds, and of the delegates themselves, who mostly looked like a mixture of crumpled English teachers and superannuated undergraduates (I’ll leave it to your imagination to decide which category I belonged to).

The events were mostly over by the time I arrived, but there was a raffle that lasted over an hour and seemed to involve teams of people striding through a large lounge area and throwing paperbacks across the room at anyone who hadn’t already won a prize. Nothing too serious got broken. The raffle was a backdrop really; the real business was meeting people. I have to say that people were very approachable, chatty and inclusive. Really, you could scarcely believe we were in the South of England.

Actually there was another reason to be there: hot water was dripping through the light fixture in the ensuite bathroom in my room, so I reported the problem and used the toilets in the basement. I went to one of the bars and felt a drip on my back. It seemed that leaks could start up anywhere in the hotel without warning. 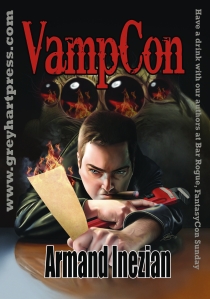 Our advert that didn’t turn up

I was pleased to see The Last Sunset postcards spread all over the hotel, and in all the delegate bags. Not so impressed that the VampCon advert I had paid for hadn’t appeared in the program booklet. (These are both books published through Greyhart Press)

Without any real ale available to give me a compelling reason to stay up very late, I eventually said my goodbyes and retired for the night. I found my bathroom leak had been ‘fixed’ by placing a towel under the light to catch the drips, which were aimed directly at anyone using the toilet. I found that by wearing a couple of towels draped over my head and down my shoulders (I looked like a venerable Jedi Master — at least, I thought so) I could use the bathroom without getting soaked.

Our advert that did show up

Saturday was filled with book launches (other publishers), chatting to authors, book dealer tables, talking to publishers, panel events, talking to artists, signing opportunities (James Herbert probably most popular), chatting with people, and guest of honour speeches. Mark Gatiss was apparently very entertaining, but I was enjoying a talk on YA publishing and so missed that.

Sunday had a bit of a Greyhart Press moment as we launched a couple of books. We had checked out Bar Rogue the day before where several other publishers had launched titles and where we were due to launch on Sunday morning. Having organised several volunteers to help carry books down from my room to Bar Rogue, I wasn’t impressed at first to find the room unusable as it was filled with boxes of books someone had left from the day before. We were moved to an adjoining bar area, which actually wasn’t a bad move at all, as it made an informal change from being stuck behind a long table. We had some excellent help from Pixie who was part of the convention team helping out sorting out some free coffee from the hotel (well, free for delegates). We chatted and we sold a few books, and our launch was done. 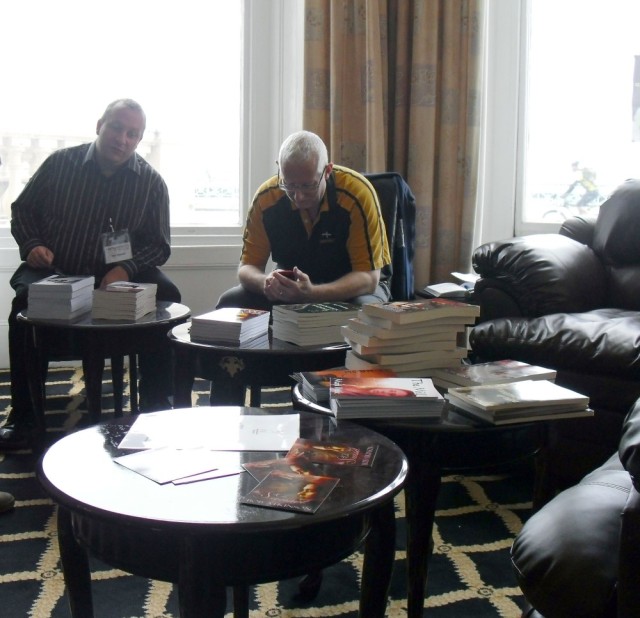 Paul Melhuish and Nigel Edwards shortly before the launch

We hung around for the next launch, an anthology called Hauntings from NewCon Press, for which one of our Greyhart authors (Mark West, who was signing copies of The Mill) was a part of. In fact, I think Mark was part of at least 3 book launches, possibly 4. Now, that’s just greedy 🙂

And that was about it. Lots of lessons learned, friends made, and fun had.

That’s probably it for Greyhart Press in person in the UK for the rest of 2012, but over in the States, there’s a formal launch party for VampCon at Roslindale Library (MA – Oct 24th) where you can meet Armand Inezian. If you dare, visit Comicon, RI (Nov 3rd/4th) where you might come across not just Armand but also Don Franklin and Jon Banchick who did the cover art for Armand’s VampCon and Don’s Reaper’s Walk (amongst many other fine creations).

Jon Banchick created this excellent banner. Watch out for it across New England

Tim C. Taylor writes science fiction and is the author of 21 published novels as of August 2021. His latest book is 'Hold the Line', published by Theogony Books. Find out more at humanlegion.com
View all posts by Tim C. Taylor →
This entry was posted in Book launch and tagged brighton, comicon, fantasycon, new england, newcon press, Roslindale. Bookmark the permalink.