Join the quest into the land of Tellus

We’re proud to launch today the first novel in ‘The Lineage of Tellus’, a high fantasy book series for fans of adventure, dry wit, and broad-minded sexuality. It features one of the most compelling love stories I’ve ever read. It has dragons and pirates too, not to mention some very dark secrets that will take your breath away.

My name isAsheiGreyhawke and I’m just like you. I go to college, have a job, live with my beloved mother, and have a pet goat named Chewy.Well, maybe you don’t love your mother. I suppose not everyone’s life is the same.

My best friends Tristane and Marianne don’t even have mothers. Now I don’t either. I came home last night after a long shift at the tavern and found her dead. She’d been murdered, her heart removed from her body … but there’s no wound to speak of.

Tristane (who’s also my ex–it’s rather complicated) says it’s the work of Sanguinem Magus. Magus is the natural energy that exists in the land I live in, called Tellus. Tris is a mage, but not the kind of mage who would do something like this.

I’m going to find the mage who did.

And then I’m going to kill them.

Memories & Murder, is book 1 of The Lineage of Tellus, a high fantasy series for fans of adventure, dry wit, and broad-minded sexuality. 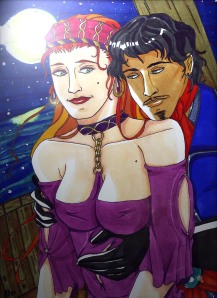 The book features illustrations by the author, which brings a unique vividness to her world of Tellus.

Want to try it before you buy it? You can read the online sample on the web right now by clicking this link (though please note that this sampler app does not reflect the high-quality formatting of the purchased book).

Or you can download a Kindle sample to your reader by visiting the amazon sales page.

Or just go ahead and buy the paperback.

Science fiction publisher and author of the bestselling Human Legion series. I live with my wife and young family in an English village. I am currently writing full time, when I'm not roped into building Lego.
View all posts by Tim C. Taylor →
This entry was posted in Book launch and tagged books, fantasy book series, fantasy romance, high fantasy, male male romance. Bookmark the permalink.