Next week is launch week…

Over the last couple of weeks, we’ve launched time travel Romance The Last Sunset, and robots go on the rampage in Cardiff city centre — YA sci fi thriller Crank Tech One: Destruction.

Tomorrow we reveal the secret of the Boston vampire congregation in VampCon.

Later next week we have The Cookie Tin Collection, a short story collection from Nigel Edwards.

And continuing the Skyfire Chronicles series he began with the novel, Terminus, Paul Melhuish brings out his new collection, Unauthorized Contact, which I’m delighted to say has proved popular amongst church ministers in Zambia (hi, Alan) 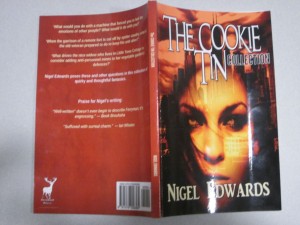 Quirky surreal humor from Nigel Edwards — some of which is politely gross, so be warned! — comes at the end of the week in the form of Badger’s Waddle: PG Wodehouse meets Terry Pratchett, and goes for a cup of coffee and a bun with Douglas Adams.

If you’re at the FantasyCon convention next week, Greyhart authors Andy West, Nigel Edwards, Paul Melhuish, and Mark West will be there signing, launching and having a good time. If you’re there, they’d love to hear from you.

Then on the horizon we have coming soon supernatural thriller: Reaper’s Walk: Hellstone by Don Franklin, occult horror/ police thriller Bridge of Blood by Philip McCormac, and the raw zombie intensity of Death Flu by Scott Brietzke. Then there will be a science fiction collection of novelettes and novellas themed on evolution by Andy West, Evolution: Engines of Life.

And there’s more to come, not least Thomas Rydder’s supernatural thriller, The Clearing… but that’s enough for now!

Tim C. Taylor writes science fiction and is the author of 19 published novels as of August 2020. His latest book is 'One Minute to Midnight', published by Seventh Seal Press. Find out more at humanlegion.com
View all posts by Tim C. Taylor →
This entry was posted in Book launch and tagged cardiff city centre, fantasyon, science fiction collection, time travel romance. Bookmark the permalink.